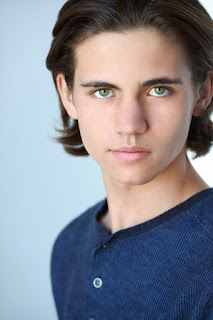 Tanner Buchanan first came to Starbound Talent in 2008 a native of the Findlay Ohio area, when he was still a wee lad at the tender age of 10. His first audition was with Starbound’s owner Wendi Davis. When I spoke to her about what she remembers about his audition with him, I’m told initially he came in to dance and auditioned with a tap dance routine. Which according to Wendi was spectacular and amazing, to say the least. He ended the dance with a back flip…in his TAP SHOES, which Wendi says caused her to scream “So loud”! After that there was no choice but to accept him, and he began to work on his acting skills, since he was already a great dancer. Once he was ready with his acting skills, he attended IMTA in New York City in 2008 with other Starbound Talent, where he won a few awards in his categories. This lead to Tanner being seen by many different agencies, and agents and he found a match with Talent Works Agency. He then began booking commercials and getting his feet wet in Tinsel town.

Tanner now has been in many other commercials, movies, and television shows. A few you may recognize him from such as his recurring role in “Game Shakers” (Nickelodeon) where he plays Mason Kendall a student and Babe’s (Main actor) crush. Also (formally ABC Family, now Freeform) “The Fosters”, where he played Jack Downey; a quirky foster care teen that Callie and Jude (2 of the main characters of the show) meet at foster care youth event. If you watch this show you know his character was recently killed in the season 3 finally. He has also had guest starring roles in other shows such as “Grey’s Anatomy”, “Modern Family”, “Girl Meets World”, and “Major Crimes” just to name a few others.

But this is not the last you will see from Tanner Buchanan…No, No my friend! He recently booked the new political drama on ABC this fall called “Designated Survivor”. Which stars Kiefer Sutherland, as the former Secretary of Housing and Development turned President of the United States Tom Kirkman. Due to an explosion during the State of the Union address he is the only successor remaining next in line. Tanner Buchanan stars opposite Sutherland as his teenage son, named Leo Kirkman, who will have to now deal (along with his family) with with a father who is thrust into the Presidency.

This new show is set to air on ABC network, beginning September 21, 2016. So set your DVR’s and watch this Ohio native in his new role. We here at Starbound are proud of Tanner and wish him continued success!