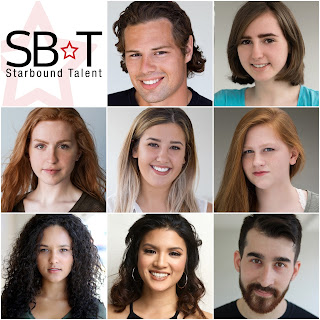 Starbound’s group of teenage and adult actors performed exceptionally well at in NYC at IMTA. Each of them arrived to NYC with a determination to prove they were the best and with goals to start a career in the industry. By the end of the week, the group fell in love with the city and were even more excited to move forward with their acting careers.

Shirley came to us from New Jersey and was a part of the Starbound NYC team. She had been pursuing acting for a few years and was ready to take the next step and find an agent or manager who would represent her in the industry. She auditioned for IMTA and with the help of her acting coach, she was able to impress the judges and receive a scholarship to the New York Film Academy.
Abby, avid in her high school plays and productions, came to Starbound knowing she wanted to be an actress. Her love for the craft caused her desire for a bigger stage to grow. The combination of her workshops at Starbound and her high school stage experience prepared her for the big stage in NYC!
Kelly came to Starbound with no prior acting experience. Her family knew she light up in front of the camera. After auditioning with Starbound, her natural talents came to light. Kelly was able to increase her confidence in workshops preparing her to take on the stage in NYC.
Asia knew acting was her passion at a young age. This passion took her to Toledo School for the Arts where she honed her acting and dancing crafts. Coming to Starbound was the next step in her acting experience. She worked with Starbound in preparation for NYC.
Vince’s love for film and acting lead him to Toledo School for the Arts. After attending TSA, Vince found a talent for music as well. The combination of music and acting sent Vince throughout the country as he went on tour and acting gigs. Vince was able to encourage everyone in workshops and better his fellow actors while bettering himself. His natural instinct and passion showed as he competed at IMTA in NYC.
Lande had a craving for the entertainment industry that lead her to star in short films throughout the area. With aspirations to start a career in the industry, Lande auditioned for Starbound. Her talent and versatility were enhanced as she spent time in workshops. She was able to take NYC by storm once she hit the stage!
Jay’s outgoing personality and natural acting instincts brought him to Starbound. Honing his craft was no issue as he performed in workshops. In workshops, Jay was able to pick the perfect piece for his personality allowing him to shine on stage in NYC!
Anna’s spunk and sass showed when she auditioned for Starbound. After performing in workshops, she was able to show her versatility as she took on dramatic roles as well. Her talent showed at each audition she had in NYC.